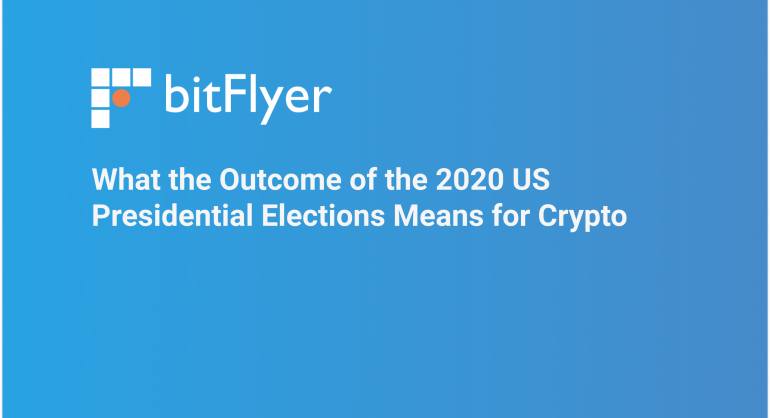 The US presidential election is just around the corner, with Donald Trump campaigning to secure a second term as President. If he wins today (November 3), how will his presidency impact the crypto market? Or what will happen if former Vice President Joe Biden makes Trump the first single-term U.S. President since George H. W. Bush lost to Bill Clinton almost 30 years ago?

One thing’s for sure, economic stimulus to the tune of trillions of dollars is guaranteed whoever ends up in the Oval Office, with both men supportive of pumping eye-watering sums into the economy. And that, theoretically, is very good for bitcoin’s price. But what about the industry as a whole?

On the face of it, Trump does not seem to be supportive of digital assets, commenting in 2019 that “I am not a fan of Bitcoin and other Cryptocurrencies, which are not money, and whose value is highly volatile and based on thin air. Unregulated Crypto Assets can facilitate unlawful behavior.”

In reality, the substance of what he said wasn’t as significant as the fact he commented about it at all – a sign of mainstream acknowledgment. Despite the comments, his administration has shown a willingness to encourage cryptocurrency innovation, provided there is consumer protection within appropriate legal frameworks.

In July, Biden tweeted “I don’t have Bitcoin, and I’ll never ask you to send me any.” This in response to a scam wherein the accounts of prominent people – Biden, Obama and Bezos among them – were hijacked in a social engineering attack that saw perpetrators make off with $110,000 worth of BTC. Interestingly, a Biden campaign accepted bitcoin donations back in 2016, noting that it was “in keeping with Vice President Biden’s strong support of technology and innovation throughout his career.” But whether the candidate himself knew about it is anyone’s guess.

In any case, Biden’s latest comment was neither pro-Bitcoin or anti-Bitcoin: he simply stated, unsurprisingly, that he didn’t personally own any.

Several bills relating to crypto have been presented to Congress by Republican representatives during Trump’s first term. The Cryptocurrency Act 2020 was introduced by Rep. Paul Gosar “to provide not only clarity but legitimacy to crypto assets in the United States.” Though failing to pass, it demonstrated the type of approach the party may take. It set out to define categories of digital assets, namely crypto-commodities, crypto-currencies, and crypto-securities, with the CFTC, FinCEN, and the SEC overseeing each, respectively.

Likewise, The Token Taxonomy Act, introduced this year by Rep. Warren Davidson, stalled during the review process. Warren said that if such a bill gained approval, it would “send a powerful message that the US is the best destination for blockchain technology.” It went further, exempting crypto tokens from US security laws, allowing individuals to transact more freely, and providing clarity to regulators on how to enforce laws.

A similar bill could lead to a breakthrough against the regulatory uncertainty that has held back innovation and investment for the space in the US market.

Rep. Soto, who endorsed Biden for President in March, has previously claimed that applying federal securities laws to digital assets hurts the market, insisting that most cryptos should not be regulated by the SEC but rather by the Futures Trading Commission (CFTC) and Federal Trade Commission (FTC).

“The CFTC and FTC are agencies with a lighter touch and we have a growing consensus among the industry that they’d be appropriate for the majority of these types of cryptocurrency transactions and the nature of these assets,” Soto explained.

Again, it is worth stressing that neither the bill nor Soto’s previous anti-SEC remarks necessarily means that a Biden Presidency would be net positive for the crypto industry. But if the Democrat-led bill can lead to the study it proposes, and the benefits of blockchain technology are sufficiently demonstrated, it could give the wider crypto industry a boost.

Since Trump’s 2016 election win, regulators have gradually got to grips with the nascent space, slowly issuing improved guidance and taking enforcement action against those failing to comply.

Crypto-friendly SEC Commissioner Hester Peirce, nominated to her position by Trump, also made a “Safe Harbor” proposal. If enacted, crypto token sales would benefit from a three-year safe harbor period to succeed as a decentralized network.

SEC Chairman Jay Clayton has been less supportive and part of the reason why a Bitcoin ETF has remained elusive. However, Trump’s nomination for him to serve as the next US Attorney for the Southern District of New York could help pave the way for an ETF approval during a second Trump term, with some speculating that Peirce could take his role.

The CFTC indicated an early belief that cryptocurrencies are commodities, with its Chairman, Heath Tarbert (again nominated by Trump), calling on regulators to take a less restrictive and tailored approach to crypto regulation.

FinCEN took a stricter stance, releasing guidance in 2019 that focused on particular crypto projects deemed to be Money Services Businesses (MSBs) under its remit.

More positively, President Trump appointed pro-crypto Brian Brooks, former General Counsel at Coinbase, as the Acting Comptroller of the Currency at the OCC, the US federal banking regulator.

In the US, the IRS treats cryptocurrencies as capital assets, so any sales are subject to capital gains tax.

Some proposals during Trump’s first term highlight attempts to change this treatment, at least for certain classifications of crypto assets. A reclassification to currencies would reduce the current tax burden and incentivize greater use. Suggested exemptions for de minimis day-to-day crypto transactions under a certain threshold, as presented in The Virtual Currency Tax Fairness Act, would also prove popular.

Correlation between the crypto market and stock indices has been high lately, meaning continued traditional market performance following a Trump victory would likely benefit the crypto space too.

If Trump wins in November, he’ll probably continue to support stimulus spending and easy monetary policy from the Federal Reserve, given his record over the last four years. Combined with a potential new round of tax cuts, it could push the stock market even higher.

It is difficult to predict what stance Biden will take when it comes to cryptocurrency. But it would be wrong to suppose that his age (77) means that he’s beyond the point of “getting it”. Biden is cybersecurity-conscious and critical of the big tech cartels, having previously drawn attention to their abuses of power and called for greater competition. That at least means that he recognizes some of the centralization issues assets like bitcoin are attempting to solve. If figures like Yang and Gabbard are able to exert their influence, he could be the first US President to recognize the potential of the industry and to take a soft-touch approach that will allow innovation to flourish.

A Trump victory would likely mean more of the same, advancing on the regulatory front. The industry knows where it stands under this administration; work with the regulators, be transparent in your approach, and seek to develop solutions that meet the regulators halfway, and they’ll be supportive. If not, we’ve seen they are not afraid to take enforcement action where deemed necessary.

That may go against crypto purist principals but would also open up the possibility of institutional product approvals and greater market access, lowering barriers to entry in the US and driving further crypto adoption.