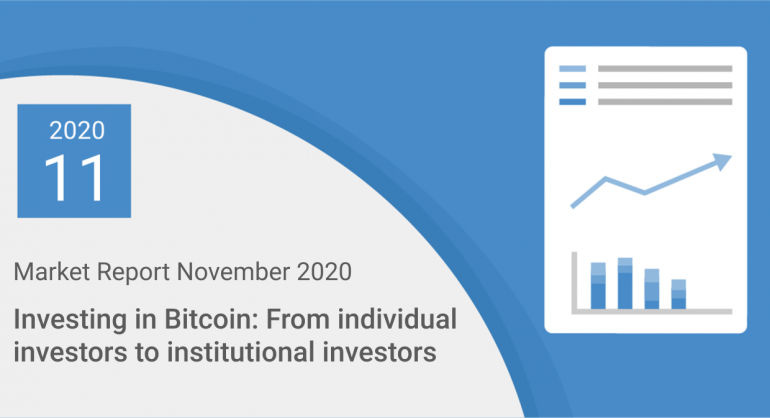 It seems that the market has changed significantly since Nasdaq-listed MicroStrategy bought Bitcoin in August 2020.

Global monetary easing and the upcoming US presidential election on November 3 has caused stock prices to continue to rise. Winter will likely see the continuation of the COVID-19 pandemic. What is the outlook for the future?

We asked Sho Koyama, an individual investor of crypto assets since 2013, of his analysis of these trends.

Today’s contributor is bullish on Bitcoin. This is because institutional investors, including companies, are making significant investments in Bitcoin.

In spite of the slump in the first half of 2019, institutional investors entered the crypto asset market. Long-term investment vehicles in the crypto market, such as Grayscale’s cryptocurrency funds, are likely to increase. In fact, the fund’s assets under management have tripled from 2.1 billion USD in May 2019 to 7 billion USD at the end of September 2020.

Bitcoin investments from general companies have become prominent with MicroStrategy buying about 425 million USD in Bitcoin in August and September. Square, a payment and remittance service, has bought about $53 million in BTC. Stone Ridge Holdings Group has bought more than $100 million in BTC.

Although Stone Ridge is an asset management company, the same can not be said for MicroStrategy or Square. Listed companies can usually use their own funds for capital investment to use for dividends or share buybacks. However, it is unusual to do this by investing in Bitcoin.

MicroStrategy’s stock price has risen since word got out of their 425 million USD purchase of Bitcoin. Other companies could expect a similar boost by buying Bitcoin.

Paul Tudor Jones, a well-known hedge fund manager, is believed to have spent $100 million on Bitcoin. He appeared on CNBC on October 22 and said that Bitcoin investments are still in their infancy and compared it to investing in Apple or Google.

Inflation hedging is being cited as the reason for investing in Bitcoin. MicroStrategy’s CEO, Michael Saylor, said he felt uneasy about the decline in the value of his assets due to inflation.

PayPal, a major digital payments company from the US, announced on October 21 that it will handle four crypto assets, including Bitcoin and Ethereum.

The fintech giant has about 346 million users and supports about 24 million merchants (as of October 2020), making it the second largest provider of mobile payments after credit cards.

PayPal launched a joint business with Paxos, a stable coin issuer. It has also been reported that PayPal is serious about acquiring a crypto asset company like Bitgo, a Bitcoin securities company.

Up to now, Bitcoin trading has been almost entirely done by individual investors, but times are about to change.

On October 22, the unsettled open interest on the Chicago Mercantile Exchange (CME) exceeded 790 million USD. This is the second largest derivatives trade in scale behind about 954 million USD in major companies.

According to Silvergate Bank, a US bank that provides institutional services for crypto assets, about 586 million USD in crypto assets were deposited in the third quarter of 2020. As of June 30, their held assets reached 1.5 billion USD; more than a 30% increase during the quarter. As a reference point, during Bitcoin’s peak in Q4 2017, these funds were at around 835 million USD. The institutional level has currently exceeded that.

There are also over 1 million active Bitcoin addresses. The influx of funds makes it seem that we may exceed 2019’s high of $14,000/BTC.

Trends in the number of active Bitcoin addresses

Comparing current to previous prices is another indicator that views on Bitcoin are improving. A major milestone for Bitcoin is its price, which has been holding over $10,000. This is the longest period that the price has stayed above this level.

*Based on closing prices

This price range is a milestone for comparison to the peak in 2017, so it is gaining global attention. While there aren’t many positions in this range, the $14,000 level has a psychological effect that creates an expectation of a one-time profit.

Let’s look at those price movements around the same milestone to see if the price will break through. There was an awareness of the 10,000 USD mark, and yet the price did not stop there. Looking back at June and July, we saw that prices broke through milestones.

Therefore, use caution when trading at a price over $14,000. You might end up buying at the peak.

US presidential election and Bitcoin

This will be the first US presidential election to occur after the rise of crypto assets. Bitcoin is on the sidelines as the US stock market is being discussed much more.

When looking at the correlation between the US stock market, particularly the Dow Jones, and Bitcoin, it appears higher than in the past. So, it may be seen as “US stocks increase = Bitcoin increase.”

Trends in Bitcoin and Dow Futures

While current polls show Biden having an advantage, 2016 taught us that we won’t know for sure until the final results are in.

Since 1984, there is an anomaly with the results of the US presidential election, and the S&P 500 has moved in that direction since mid-August.

Since the S&P 500 is increasing, the anomaly would point to the incumbent.

US stocks to rise regardless of the election

Today’s author believes that stocks will rise regardless of who wins. This is because of fiscal stimulus and a rebound in the housing market.

However, if the conflicting parties in the house and senate remain, the increase in corporate taxes could be blocked. If this conflict is resolved, the policy passed would be beneficial to the economy in addition to the political stability.

Large-scale monetary easing in the US has helped the housing market. Looking at new and used home sales, there was only a short decline for a few months. After that, there has been a dramatic increase in sales.

Source: FX for Everyone

According to the GDP Now published by the Federal Reserve Bank of Atlanta, the US GDP growth rate is projected to be 35.2% for the next three quarters (as of October 20).

While there is some recovery from the COVID-19 recession, I think there are some positives here.

There have been major changes in the Bitcoin market in the last few months. The scale of derivatives exchanges for corporate customers has been expanding as more institutional investors have joined in. Even if the price were to drop, there would not be as many selling.

It seems that both people and companies are increasingly paying attention to Bitcoin.

However, Bitcoin has influenced the stock prices of companies like MicroStrategy and Square.

If US stocks rise after the US election, will Bitcoin gain some momentum? It seems that we should look into the true value of these assets.

He has 12 years of history in investment. Since 2009, he has been trading in FX, stocks, CFDs, and other financial products. He started investing in crypto assets in 2015 and launched corresponding media in 2017. From 2018 onward, he focused mainly on Bitcoin leveraged trading. His investment decisions are based mainly on the supply and demand balance such as investor trends and fundamentals analyses.

He has been a freelancer since 2018. He trades stocks in the morning and then performs content marketing while keeping an eye on FX and crypto assets in the afternoon.