The impact of COVID-19 on the cryptocurrency market 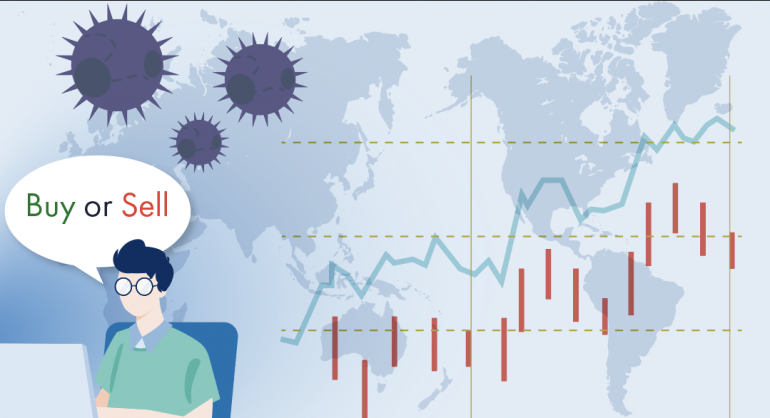 So, we got Mr. Saito from Cryptact Ltd. to contribute for today’s post.

Hello, I am Gaku Saito from Cryptact Ltd. bitFlyer asked me to write today’s post under the theme of “the impact of COVID-19 on the cryptocurrency market.”

I’m sure that everyone has many different concerns when it comes to COVID-19. I’ll be narrowing it down to economics, specifically how I expect that it will affect virtual currencies. Today’s post is a follow-up to a post I made on my own blog on note.com on February 29 (only available in Japanese). Today’s post will contain additional information due to how things have changed since then.

The difference between the coronavirus recession and the Lehman Brothers bankruptcy

First, the market is determined by fluctuations in productivity and leverage (credit/lending). So, a recession is basically a product of lowered productivity, growth, and/or leverage.

Our current situation is only a loss of productivity. To be specific, it is not a gradual decline, but a result of an intentional suspension. Fluctuating productivity or growth rates are not ideal. However, the only control for this is to stop production. It is like flipping a switch on or off.

What we’re currently facing is not a natural recession caused by the coronavirus, but a self-fulfilling effect of switching off. By switching back on, things will return to normal.

A recession caused by leverage is completely different. Leverage is cyclical, so it will not recover once it starts. In the event of a long-term cyclical financial crisis, it does not work like a recession or something akin to a recession. Instead, it has to be settled by negotiating how it lands or through bartering.

This is what a Lehman Brothers bankruptcy kind of event is. At that time, the credit market (credit/lending market) crashed, and credit was sold. By the second week of March, credit was being sold and the prices started falling. However, it is still positive even if the price drops as executions occur. Everyone wants to sell in a debt crisis, but there are no buyers. It can not be converted to cash.

The credit market is much larger than the stock market. In comparison to the collapse resulting from the Lehman Brothers bankruptcy, the current financial impact of the coronavirus differs in two ways. However, the suspension of economic activity could end up in a financial crisis. If it does lead to an impact that is at least comparable to the Lehman Brothers bankruptcy, governments and central banks would be able to take countermeasures because they can see it coming.

Japan was the first country to switch off its production activities, but others started following suit in March. If it remains switched off, it will eventually lead to reduced leverage. So, how long can it remain off? The American government called the Lehman Brothers bankruptcy a moral hazard, eventually caved in and bailed them out after two weeks.

The coronavirus recession is unusual in that we expect to see a quick recovery when it is switched back on, unlike when leverage is the problem. Prolonged losses can lead to a snowball effect, and regardless of whenever the coronavirus ends, and a decline in leverage may occur which would lead to a more serious financial crisis, a debt crisis. Whether the coronavirus can converge or not by the time limit will be a turning point for the economy.

Due to this, governments are attempting to do what they can by coordinating economic policies and monetary policies. The ultimate goal is to delay any debt crises as much as possible.

This is not easy even if economic measures are taken. If production is stopped, they will lose effect and are little more than putting band aids on hemorrhage.

Sure, anything can happen if infinite funding is available, but it will be more difficult in terms of cost effectiveness than normal economic measures. It at least has some merit in delaying the debt crisis, so there is no other choice.

Monetary policy is a particular burdon. It is conceptually good if it can be done before the debt crisis. Yet it is important when the actual debt crisis hits. Therefore, setting it off too early will make things harder later on.

So, I think that economic measures and monetary policy are the only ammo available for this. In addition to the announcement effect, it will take some time but there are some uses for it.

Ultimately, the timing of the debt crisis is likely to be determined by people’s anxiety. In order to appease their anxiety, they only have to show a commitment, even if it only results in delaying the inevitable.

Cryptocurrencies in a crisis

Now that we’ve covered what happens in a debt crisis, let’s look how this affects cryptocurrencies.

Virtual currencies, especially Bitcoin, are sometimes called digital gold. I think that this is for two reasons.

1) The rate of issuance is fixed. It is not tied to a specific business or organization.

2) There is no major connection to actual economies.

The first one is similar to gold. While we don’t know the exact amount of gold in existence, there is a limit to how much is mined annually and it is definitely not an infinite resource. It is just rare. Since Bitcoin has an upper limit to how much will be issued, and the rate of issuance is set, it is unlikely to have its value diluted like money does.

Also like gold, Bitcoin is not an asset that is tied to any specific government, business, or organization. Since it is literally a decentralized currency, there is no individual who can designate its value.

Assets such as these can be seen as safe in any crisis, including wars or the spread of disease. This is because as countries fight each other, there is a risk that one nation may cease to be. In spite of this, assets such as gold will still remain in the overthrown country.

That leaves the second point. When an economic crisis occurs, assets that are not connected to the corresponding economy are usually resistant to it. It is hard to say that Bitcoin has a deep connection to real economies. In such a crisis, there is a possibility it will be resistant to the crisis due to not having a deep relationship.

It may sound strange that not having a strong connection to economies makes it resilient in a crisis, this is one of its prominent features.

The cryptocurrency market in the coronavirus recession

As I mentioned, it is quite possible to buy Bitcoin in various crises. However, in my personal opinion, we can assume there will be a strong buying phase during a crisis. Even in the event of a war or economic crisis, the worst crisis where cash evaporates is an event similar to the Lehman Brothers bankruptcy.

There are some who see the current coronavirus recession as a lead up to another event like the Lehman Brothers bankruptcy, but such claims can not be confirmed at the current point in time. Escaping from a crisis will likely depend on the direction things go in.

Of course I don’t want one to happen, but as the coronavirus becomes more prevalent, economies and global society may face a crisis. I think this will lead to a stronger trend of buying Bitcoin, and that it will be a phase where it is bought as a sort of hedge.

From a mid-to-long term perspective, the expected result of using large-scale economic and monetary measures of an impending debt crisis is a larger burden on national finance. I think that this serves as a potential way to drum up support for the demand for Bitcoin and motivation to buy it. This kind of action could lead to a positive effect on its price.

However, various governments are implementing measures including halting production or enforcing lockdowns in order to curb the spread of the coronavirus. This could have negative effects on Bitcoin as well. For example, we could see a loss of mining hash power.

April 2007: Entered Goldman Sachs Securities. There, he was involved in a variety of investments including nonperforming loan investment, private equity investments, real-estate investments, and shipping investments. He also worked in business revitalization and legal arrangements.

May 2010: Transferred to Goldman Sachs Investment Partners. There, he managed global hedge funds for assets in excess of 800 billion JPY. As a hedge fund manager, he managed and invested in stocks, bonds, foreign exchange, interest rates, CDs, derivatives, loans, and up to 80 billion portfolios.

Note: This is a translation of the original blog article from bitFlyer Japan.